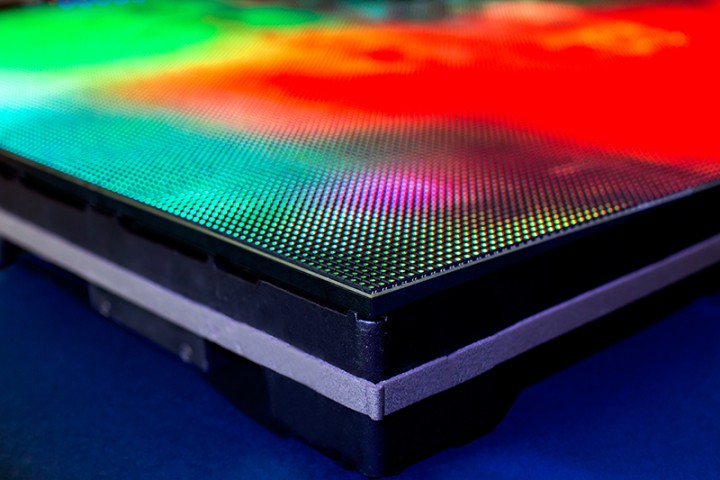 It’s hard to believe that it’s already been nearly two months since ExhibitorLIVE.  For those of you who attended this year, you’ll probably agree that there were some pretty cool uses of seamless LED (light emitting diode) video display tiles in many of the exhibits.

LEDs are the new, cool kid in town, but before you go running out and burning through next year’s trade show budget, take some time to think through how you can effectively and efficiently add LED seamless tiles into your exhibit or environmental design.

Ask these questions:
1.    How can LED tiles help promote my brand?
2.    Will they be used for informational electronic banners, i.e. video walls and advertisements or will they be incorporated into the atmospheric design of the exhibit, to add some “wow” factor?  Perhaps a little of both?

Every inch of your trade show space is valuable real estate, so having the ability to show multiple ad pieces in the same space is a plus.  This is where seamless LED tiles excel.

All LED Tiles Are Not Created Equal
If you are new to seamless LED tiles, you’re going to hear a variety of technical terms, one of which is “pitch.”  Pitch is the distance between individual LEDs on a display tile, typically ranging from 40 mm to less than 1 mm.  It can also correlate to higher resolution; the closer together the LEDs are packed in, the higher the resolution will be per tile.  Of course, the more LEDs there are per tile, the higher the cost.

LED tiles designed for outdoor use, such as billboards and professional sports stadium score boards will typically use a higher pitch value of around 40 mm which means a lower resolution, because each LED is spaced 40 mm (roughly 1.5 inches) apart.  Why would they opt for a lower resolution tile?  It all has to do with the distance that the audience is from the display.  The farther away they are from the tile, the better the image appears.  However, if you get too close, you begin to see the screen break down into the thousands of individual LEDs.

The most common pitch in a presentation environment, such as a trade show, is 2.5 to 2.8 mm (roughly 1/8 of an inch) apart, which will provide exceptional video quality for most trade show video applications.  There are LED tiles available with smaller pitch values, but unless you’re a Hollywood production, you’re probably not going to need them.

Flexible tiles are, as their name implies, able to flex and curve around corners and shapes.  In the hands of a clever designer, the possibilities with flexible LED tiles are endless, especially because they can be mounted in almost any setting.

Flexible LED tiles are generally selected for aesthetic design, to dazzle the senses by immersing visitors in a seemingly magical world of light and color, where the video panels actually wrap around different shapes and angles to create an environment that seems to come alive before visitors’ eyes.  As you may have guessed, though, flexible LED tiles command a higher price than rigid ones.

Seamless LED video display tiles can be an exciting addition to your trade show exhibit or environmental design, just be careful not to rush blindly into the technology with an open checkbook!  Instead, sit down with your designer and plan out a strategy for how best to incorporate this new technology into your exhibit or environment space to showcase your brand.

Apple Rock is happy to help you get started on ways to apply LED tech to your business needs. Please click here to get the conversation started.